Canon's new RF 100mm F2.8L Macro IS USM lens is the company's first RF-mount lens designed for close-up photography. Its minimum focus distance is 26cm (10"), giving a maximum magnification of 1.4X. The lens' image stabilization system switches to a 'hybrid' mode when focus distances are short, which activates shift (horizontal and vertical translation) reduction on top of the standard angular shake reduction. During regular shooting, the IS system reduces shake by up to 5 stops on its own and by up to 8 stops when attached to stabilized bodies, such as the EOS R5, according to CIPA standards.

The lens has 17 elements in 13 groups, and uses a Super Spectra coating to reduce flare and ghosting. The lens' autofocus system is powered by 'Dual Nano USM': two Nano USM linear motors ensure quick and silent focus, which afford a significant improvement over the ring-type USM drive found in the previous 100mm Macro. The lens also has a control ring for adjusting settings such as ISO and Exposure Compensation, and is threaded for 67mm filters. 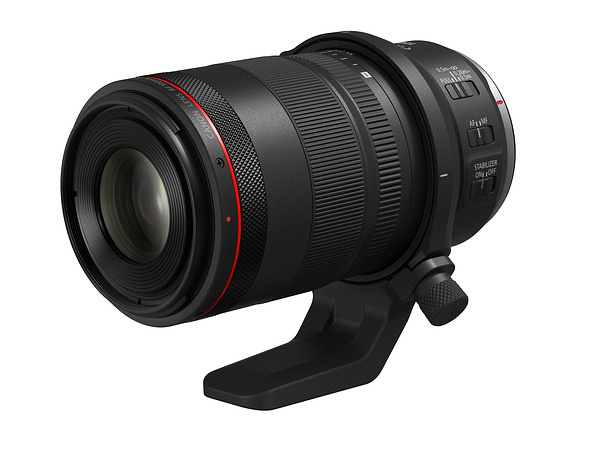 The most interesting feature on the RF 100mm F2.8L is probably its 'spherical aberration' adjustment. Like the Defocus Control feature on some Nikon lenses of yesteryear, it provides a dial (which moves a lens element or elements) that lets shooters adjust the 'character and appearance' of bokeh, as well as the overall softness of the image. It does so by under-correcting or over-correcting spherical aberration to yield either soft-edged or hard-edged background bokeh, respectively, with the opposite effect resulting for foreground bokeh. We'll put the 'SA' feature through its paces when the lens arrives this summer.

As with all Canon recent L-series lenses, the 100mm F2.8 is sealed against dust and moisture, and has a fluorine coating on the front element to repel oil and water.

The Canon RF100mm F2.8 L Macro IS USM lens is not only Canon’s first RF lens designed specifically for macro photography, but also the world’s first[1] medium telephoto macro lens with a maximum magnification of 1.4x. The new lens, designed for both advanced photo enthusiasts and professionals, takes macro photography expression to the next level with the introduction of a spherical aberration (SA) control ring. The SA control ring allows users to change the character and appearance of the bokeh and obtain a softer focus effect with a simple turning of the ring to the desired result.

Additional features of the Canon RF100mm F2.8L Macro IS USM include: